iPhone as a benchmark for the smartphone industry, both appearance and system have become the object of the Android camp in recent years, especially after the iPhone X. It is no exaggeration to say that this year's domestic mobile phone market has become a sea of ​​special-shaped full-screen products. It is in this environment that, following the launch of vivo's NEX, its brother brand OPPO also recently launched a very distinctive product-OPPO Find X.

Find X is the return of the OPPO Find series. Rumors about the aircraft have appeared on the Internet last year. The appearance of the real machine has made many netizens sigh that these four years have not been in vain. Compared with mainstream mainstream full-screen mobile phones, OPPO Find X uses a full-screen design closer to the ideal state. As shown in the figure above, it is equipped with a full-view curved screen similar to Samsung S9, but it has no forehead and extremely narrow chin. OPPO calls it a curved panoramic screen.

Compared with the iPhone X, it can be clearly seen that in order to achieve a 93.8% screen ratio, OPPO has also narrowed the left and right borders of the screen, its width is 1.65mm, and the top border width is controlled at 1.9mm. Compared to the 2.5D curved glass of iPhone X, OPPO Find X's hyperboloid glass is not only more impactful, but also brings a more peculiar operating feel. 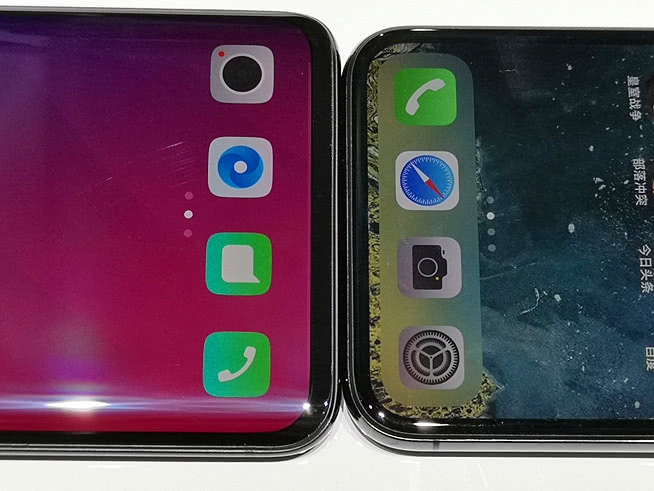 It is worth noting that OPPO Find X is also the first domestic product to use COP packaging technology, which makes it have a narrower chin and a width of 3.4mm. In actual comparison, it may be seen that the phone is only a bit wider than the iPhone X, but it is already narrower than all domestic full-screen phones. Of course, reaching this level means that the production cost of Find X is higher.

In order to create a stunning full-screen and retain the traditional front lens, sensor and handset, OPPO has designed an ingenious mechanical lifting module for Find X, which is officially called a dual-track periscope structure. With its OPPO Find X, the upper half of the fuselage can be raised to a height of about 1cm, and traditional components are integrated in it. OPPO also adds 3D structured light components to achieve 3D face recognition. On the back of the dual-track periscope structure, OPPO retains the rear dual camera, which solves the problem of taking pictures.

Simply put, compared to vivo NEX this product OPPO gives a more bold design. As for the durability of the dual-track periscope structure, the official said that it has gone through 300,000 tests and has a good dust-proof and waterproof design.