The good shows in May took place in turns. Now it has been confirmed that there will be 360, OnePlus, OPPO and Hammer manufacturers who will release new products. Xiaomi is also likely to launch Xiaomi 7. The hammer technology among them is very familiar to everyone. According to Lao Luo and various official sources, the flagship mobile phone at the Bird's Nest large-scale cross talk show on May 15 is Nut R1. And less than two weeks away from the press conference, the "true body" of this phone finally emerged. 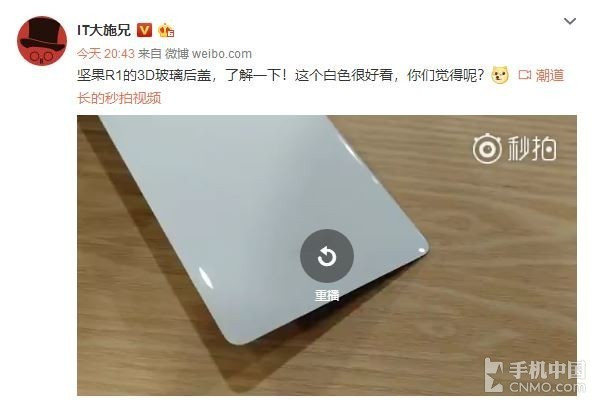 According to videos reposted by several digital bloggers on Weibo last night, the 3D glass back cover of the Nut R1 is white in design, with greater curvature on both sides than the top and bottom. Although the bottom is covered with mosaic, it can still be seen as a nut phone The iconic smartisan English logo, the original blogger who released the video also said that the nut R1 should have a pure white version, the price may be more than 4,000 yuan.

Judging from Lao Luo's propaganda of Nut R1 on Weibo, this 2018 flagship machine of Hammer Technology will definitely not let users down in terms of hardware and other aspects. It was only at the May 15th press conference that Nut R1 was not the only protagonist. We guess that Hammer Technology will bring a combination of software and hardware products, which will cost a lot, but will likely have revolutionary significance. What kind of medicine is sold in Lao Luo's gourds?